“Culture Making” has nothing on dinner making

People have a lot to learn from their dogs.

At the risk of overexposing Comment‘s readers to Andy Crouch‘s wonderful work Culture Making (IVP Books, 2008), I would like to offer up myself as a case study on culture making. I do this not out of hubris, but because I believe that in my behaviours and beliefs, I challenge and refine a few of its basic assumptions.

Crouch discusses four “postures” that all of us take towards culture. I’d like to discuss how I reflect each of them, in turn. 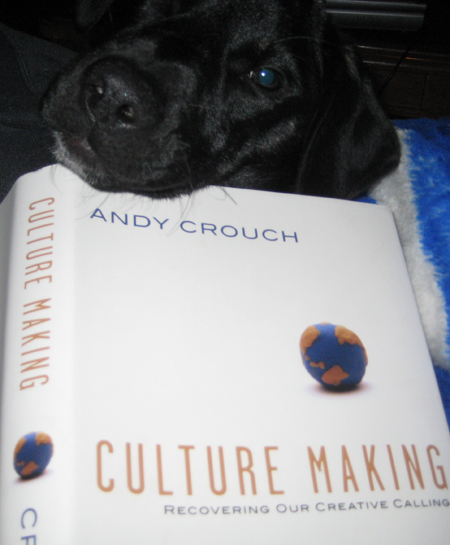 Condemnation. Crouch says that while some things demand outright condemnation, too many of us take on a posture of condemnation, and so miss out on a lot of what’s good in culture. I wholeheartedly agree. I condemn almost nothing. I take a very positive view of absolutely every human being I meet, and I try to be visible and extroverted with my affections. Similarly, I make no condemnation of things that are beyond me, or to which I cannot culturally contribute—the global economic crisis, for instance, or world hunger. Of course, I do make some comment periodically on my own hunger—all politics, as they say, is local, and I work to keep my trusted representatives accountable. Here I must also pause with an approving hat tip to my colleague, affectionately nicknamed Cosmo, for his strict condemnation of squirrels, as an entity demanding outright rejection.

Critique. Crouch complains that too many critics of culture overemphasize analysis, while under-appreciating participation and production in society. Again, I feel I am ahead of the curve with regard to this posture. I don’t allow myself any kind of “cultural passivity,” which is to say, judging from a distance. Rather, I consider myself a friend to the front lines, and a foe of “paralysis by analysis.”

Consumption. It’s here that my reading of Crouch takes a morose turn, as I find myself approaching the dark edge of hypocrisy. While I hear what Crouch is saying about walking around “amused, titillated, distracted or thrilled”—but NOT reflective—I feel a disconnect between my head and my heart. My head says I should reflect on the worldviews implicated in what I consume, but my heart’s reflection is usually limited to how much I can possibly consume in a single bite. I know I mustn’t consume “unthinkingly,” yet it is in this very state of being that I often find myself. I continue to struggle with this posture of consumption. Yet I take comfort in Garber’s proximate argument; that in this case, some reflection on how I devour is better than no reflection.

Copying. Crouch argues that “aping” secular forms, then merely adding a Christian message, produces inauthentic, tame results. Here, I would have to agree. A canine acquaintance of mine, who goes simply by “Murphy,” has gone through the majority of his mature years acting and looking like his closest colleagues—in this case, the horses he lives with. Why does Murphy insist on behaving like the culture around him, when clearly he has something more to offer, woven into his inner dog-ness? He would argue for what Crouch calls a “crucial openness to common grace”—that even his friends the horses, knowingly or not, can reflect their Creator. But I think Murphy could have spent his life making his own unique contributions to the barnyard, without descending to mere mimicry.

Now, I want to step back for a minute, having gone through the four postures Crouch views as negative interactions with culture. I want to reflect on food. Not because it’s dinnertime, but because Crouch uses food as an analogy for good culture making all over his book. I want to refine Crouch’s argument slightly, positing that food is not just an adequate analogy for culture making; in fact, food is the highest form of culture making. If I were to ask you how you contributed to making culture, what response could possibly make me happier than if you said, “I prepare food”? 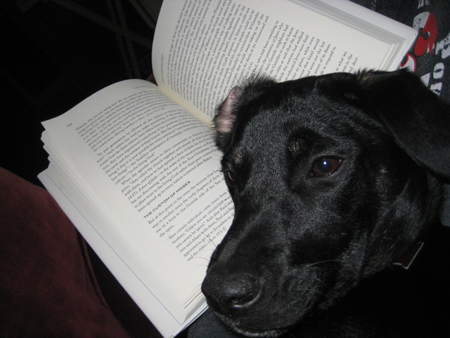 Moving on to what Crouch argues should be our postures towards culture. Here again, I bear out Crouch’s argument in a way I’m sure he did not intend.

Cultivation is what I do. I protect what is mine. I discern as best as I’m able what should be allowed to flourish under my care, and what would best serve as “fodder” or “fuel” for my culture making—in this case, what I choose to consume (typically, everything).

Creation, on the other hand, is “a hand I’ve not been dealt,” so to speak. My owners—those I trusted most—had something to say about that when I was but five months old, when they folded my creational cards on my behalf, and against my will.

In summary, then, I wholeheartedly subscribe to Crouch’s vision of culture making. I believe that I bear out his instructions in my own way, though for obvious reasons I disagree with his definition of “culture” as “what human beings make of the world” (emphasis mine).

I have no hubris about changing the world. I understand that change is measured in decades, and that even should I rise to prominence and power in my own community, I will only ever make a small contribution to the common good of my city. Yet I press on, in whatever direction I feel is important, cultivating flowerbeds and creating messes as I go, obedient to my highest—if not loudest—calling.