SIX QUESTIONS . . . Table servers advance God's Kingdom from nine to five. If they don't know this, they won't be very good at it. They're my audience, and my work is to show them that their work has eternal significance. 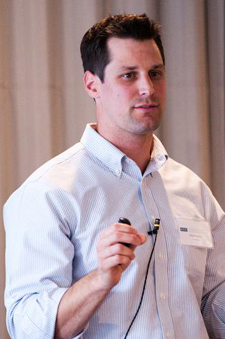 Brian Brenberg teaches classes in business and economics at The King’s College. His teaching is backed by a variety of for-profit and non-profit experience. Prior to joining King’s faculty, he served as grants manager at the Charles Koch Foundation. He also held positions in the medical device and financial services industries, as well as public policy research.

Brian Brenberg: When I ask my new students what the Bible says about economics, they usually answer that we should help the poor and be honest. That’s true. That’s also an incomplete and rather boring way to think about economics, which is probably why most young Christians don’t aspire to be economists. I want my students to see that if economics is part of God’s creation, then he has much more to say about it than we think. And that means we have much more to learn.

Here’s part of the “more” God has to say about economics. The Bible tells us man is made in God’s image, one aspect of which is creativity. The Bible also tells us man is fallen, which means we can use our creativity in harmful ways. Even when we want to love our neighbour, the best way to do so isn’t always clear. To love, you need to know who and how. In a world where technology allows us to touch many more lives in many more places in many new ways, the “who” and “how” questions can get pretty complex.

These things that most Christians believe about themselves and their world are the beginning of a biblical understanding of economics. For an economic system to work, it has to fit our condition. To borrow from James Madison, what is economics but the greatest of all reflections on human nature? As he observed, men are not angels, and so we have to think about economics, and economic policy, in a way that brings out the best in creative sinners.

Biblical economic policy does at least four things. First, it allows plenty of space for people to develop their creative capacities. At the same time, it ensures that this space is bounded by clear and stable laws that contain our tendencies to do harm. As creative people discover new ways to serve one another, biblical economic policy safeguards mechanisms, like the price system, that allow us to share and use information about these opportunities. And it upholds the outcomes of creative activity—like profit and loss—that reward us when we serve others well and direct us elsewhere when we don’t.

Economics is a tool God has given us to help restore fallen creation. I doubt most Christians see it this way, not because they have rejected the idea, but because they’ve never really thought about it. I’m trying to contribute to a culture in which we think about it.

Who is the “public” for your work—who is it for, and how does it affect the lives of those who engage with it?

In Acts 6:2, the Apostles realize they are missing opportunities to preach the Gospel because they are spending too much time serving tables. They should be focused on “full-time ministry,” as we commonly use that phrase, because that’s what Apostles are good at.

When I speak to an audience, usually students, I assume most won’t be called to “full-time ministry.” Most will be “table servers”—designers, builders, financers, and deliverers of everyday stuff. And most won’t recognize their work as a calling, because few of us behind the lectern or in the pulpit ever talk about this way. In Acts 6, verse two gets all of the attention.

I encourage my audience to read verse three. What kind of man is fit for the work of serving tables? A man who can’t hack it when it comes to “real” ministry? A man of low calling? Here’s what the Apostles say: “Therefore, brothers, pick out from among you seven men of good repute, full of the Spirit and of wisdom, whom we will appoint to this duty.” Men like Stephen, “full of grace and power.” In fact, the rest of chapter 6 and all of chapter 7 are devoted to recounting the work of this incredible verse-three man.

Table servers advance God’s Kingdom from nine to five. If they don’t know this, they won’t be very good at it. They’re my audience, and my work is to show them that their work has eternal significance.

Why do you do what you do?

The short answer is that God showed me in grad school that almost all the plans I had made were wrong. Then he started to open doors that, in a winding sort of way, led me to The King’s College. Now I do what I do because it brings me joy. And I think He wants me here for reasons I can’t yet see.

What skills, proficiencies, and virtues does this work develop in you?

I’ve had to get a lot better at reading the Bible more carefully and more often. I’m also speaking to an audience of students who are non-stop consumers of media—movies, music, television, and whatever else the Internet has to offer. Their tolerance for uncreative, uninspired information transfer is low. I’m not sure this is a good thing, but it has challenged me to become much better at using story, surprise, and imagery to present ideas.

What five books would you recommend to someone interested in understanding or pursuing the sort of work you do?

I’ll suggest two. Al Wolters’s Creation Regained, recently recommended to me by my colleague, Alissa Wilkinson, is my current favourite. It’s older, but not outdated, and has helped me better understand work as it relates to creation, fall, and especially redemption. I also like a book called Little Bets by Peter Sims. It’s not written by a Christian or for a Christian audience, per se, but it illustrates how we can use principles of experimental discovery to find better ways to serve others. It reminds me that failing productively is inseparable from being a good steward.

What do you do for fun?

A long walk with my wife and our little girls, a floppy slice of pizza, and a few rounds of “Jesus Loves Me” before bed make for a great night in New York City. When we can escape, it’s to Minnesota.