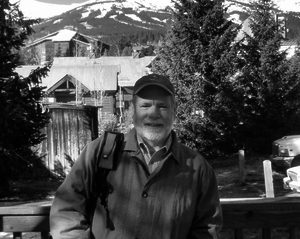 The fundamental problem of the human race: we are alienated from God.

But things are not looking so hot these days. What happened? Why is everything so bent and broken? Why, God? Why am I so bent, so broken? And others, too?

Everyone, with no exceptions, asks this “why” question. Annie Lennox asks a haunting “Why” in her angst-ridden song with the same title. In it, she probes her own inanities and the brokenness that exists between her and others.

Why? Why bullies on the playground? Why worms and caterpillars struggling for life on the sidewalk or asphalt street after a rain? Why so much concrete and asphalt in the first place? And the multitude of fire ant mounds? Why crab grass in my yard instead of lush Bermuda or Fescue? Why is it so hard to learn, yet so easy to forget? Why the Rastafari movement or the Caribbean syncretistic religion of Santeria? Why the rank objectification of women and the female body? Why vicious animal-on-animal prey you can see on Animal Planet? Why is humanity a ravenous wolf to itself—homo homini lupus? Why uber-greedy CEOs? Why did Chris die of a brain aneurism last year, just two weeks after being my roommate at a conference? Why is my friend and colleague Rodney battling for life in ICU with pancreatitis at this writing? Why did my mom have to endure a dozen major cancer surgeries before her death? Why so much residual global racism? Why such loneliness? Why the rigid social and class distinctions at the Plaza, the Broadmoor, or the Biltmore? Wo ist Gott? Why? Ad nauseum.

I don’t know if there is an official interpretation of this nursery rhyme, which we probably heard at our mother’s knee when growing up. But it is possible to view it as a parable depicting the creation and fall of humankind, a snapshot of what happened in Genesis 1-3. And it’s the story in this latter chapter that tells us what went wrong. It tells us why we and all things are such a mess today.

In the beginning at creation, “Humpty Dumpty” sat on a wall, well and good. But then “Humpty Dumpty” had a great “fall”—plunging into sin. Fragile egg that he was, the consequences were devastating. No amount of human effort, whether of the king’s horses or the king’s men, has been able to put “Humpty Dumpty” back together again.

The nursery rhyme ends in despair. There is no solution offered to Humpty Dumpty’s brokenness. Fortunately, the Bible doesn’t end in the same way. It goes on to explain how God puts Humpty Dumpty back together again through Jesus Christ. That is the story of redemption. But we are getting ahead of ourselves. For now, we want to use these four lines to illustrate the fall and the consequent comprehensive brokenness it has left in its wake.

This is the second “act” in the overall narrative of the Scriptures, the next major theme in a biblical view of life and the world. First, there is the good news of creation, but now we have the bad news of the fall. It introduces fundamental conflict into the biblical drama, which must be resolved before God’s story ends. It shows, contrary to other worldviews, that evil is not rooted in creation itself, but in the moral rebellion of the human race against the divine authority of the holy God. I sometimes call this episode the “uncreation” because of the damage it did to God’s very good world: how it twisted his intentions for humanity, for our knowing and loving and culture-making, and for all the earth.

Sometimes, however, we find it difficult to take this primeval story seriously. Why? Probably because it has been so frequently satirized. As Herbert Schlossberg observed, “Centuries of religious art and, in recent years, hundreds of cartoons of naked women, apples, and snakes have served to distract us from the meaning of the Fall in Genesis 3.” Today, as Jamie Smith has helped me understand, the story of the Fall is ridiculed in light of the reigning evolutionary notion of predation and the necessity of death for the survival and development of the fittest species.

Regardless, we must try to set our contemporary prejudices aside, and discover that while this narrative may be hard for us to understand, as Peter Kreeft has said, it makes so much else understandable—in particular, our persistent brokenness and the world’s deep pain.

The first five verses of Genesis 3 are an account of the temptation of the woman. Verse 1 informs us that a most crafty serpent was appropriated by Satan as the agent of temptation (Revelation 12:9; 20:2). In confronting the woman, he asked her a probing question: “Indeed, has God said, ‘You shall not eat from any tree of the garden?'” Not only does the serpent/Satan test the woman’s knowledge of God’s word, but he also casts aspersions on God’s character, suggesting subtly that he is stingy with his provisions. In verses 2-3, the woman responds by reciting the commandment originally given by God (Genesis 2:16-17). She adds, however, that the forbidden fruit was not even to be touched, much less eaten, lest they die. Was Eve the first legalist? In an attempt to persuade the woman to follow his own rebellious course, the serpent/Satan categorically denies God’s assertion that disobedience would result in death. He follows this up with the promise that eating from the forbidden tree would not result in death, but transform the man and woman into veritable gods. They could do their own thing, live in freedom as they pleased. Sadly, the woman believes these lies, and convinces her husband to join her in mutiny against their Maker.

At that moment, everything changed. A new consciousness swept over them. They lost innocence and discovered shame. Sin struck at the deepest point of their humanity in their sexuality. They attempted to cover their nakedness with fig leaves. The tragic consequences of their prideful selfassertion followed immediately. The rest of Genesis 3 describes these consequences in the form of four separations and three curses.

First, human beings are separated from God (3:8- 9). When the Lord made his routine appearance in the evening for fellowship with the man and his wife, the response of the now fallen couple is telling: they “hid themselves from the presence of the Lord God among the trees of the Garden” (3:8). Instead of joyfully going forth to meet their Creator, they now hide, embarrassingly estranged. They are ashamed, not only in front of each other, but also before God. The very purpose for which God had created this primeval couple is now thwarted, cut off from the Author of life. Because of sin, therefore, the fundamental problem of the human race is spiritual and theological in character: we are alienated from God. Now we worship and image idols. Humpty Dumpty has had a great fall.

Second, human beings are separated from or within themselves (3:10). Estrangement from God has direct inner repercussions. When the Lord inquired about the man’s location, he responded in words that revealed a radically altered inner state: “I heard the sound of you in the garden, and I was afraid because I was naked; so I hid myself” (3:10). Fear, shame and guilt have shattered the previous sense of wholeness and well-being. The line dividing good and evil will cut through the heart of every human being, as Solzhenitsyn has noted. Because of sin, therefore, human beings have sustained significant inner damage; we are deeply alienated within. Now we vainly seek happiness and fulfillment on our own in a life of pure immanence under the sun. Humpty Dumpty has had a great fall.

Third, human beings are separated from each other (3:11-13). When God asked the man about his nakedness and whether or not he had eaten the proscribed fruit, he immediately sought to defend himself and to place the blame elsewhere. “The woman,” he said, “whom you gave to be with me, she gave me fruit of the tree, and I ate” (3:12, emphasis added). This episode marks the beginning, not only of the battle between the sexes, but also of deep divisions within the human community. Our theological and psychological alienations have had significant social repercussions. Sin not only severs us from God and ourselves, but also from each other. Humpty Dumpty has had a great fall.

At this point in the narrative, God announces a series of curses upon the serpent, whose humiliating “dusteating” defeat is prophesied; upon the woman, who will struggle mightily as mother and wife; and upon the man, who must sweat profusely in order to have dominion over the earth. Then we die.

Once these three judgments are administered, a final separation is described at the end of Genesis 3. God drives the first human pair from the Garden, and stations an angelic battalion at its east entrance to prevent them from reentering it again (3:20- 24). We traded the bounty and blessing of Eden for the chaos and confusion of a broken world. Ever since, we have sought to get our happiness back by our own “utopian” efforts, whether individualistically or collectively.

Only God and his kingdom can fill the longings of the heart. Life without God is vain and futile. Humpty Dumpty has had a great fall.

Genesis 3 tells the story of the historic space-time fall and its results, to borrow the words of Francis Schaeffer. At the heart of this episode was the misguided human quest for freedom, autonomy, self-legislation and independence. The results were ignorance and wrong desire. The noetic and affective effects of sin have horribly disordered our lives. The four separations plus three curses add up to death. The world is now a cosmic cemetery, groaning in desperation, hoping for relief. “Humpty Dumpty” has had a great fall. What can deliver us from this death? What can save us from this fall?