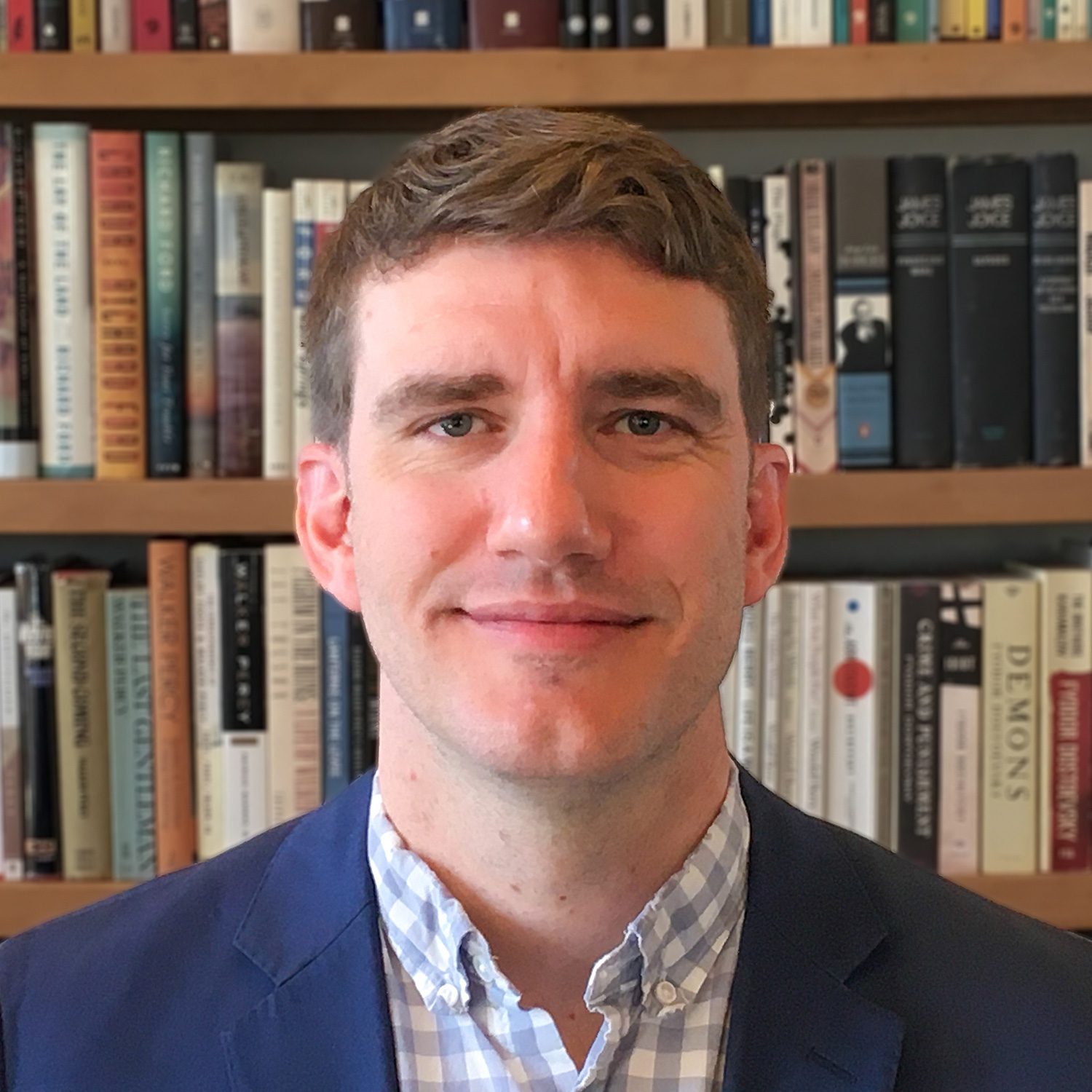 For the last six weeks or so my dad, a skilled carpenter, has been building and installing some custom bookshelves in my house. When he finished around noon on Monday, they looked fabulous. Later that afternoon when I knew the soft, buttery light would be streaming into the windows I snapped a few photos and posted them on Twitter. The post sat there for half a day relatively unnoticed, as most of my tweets do. But late Tuesday morning it started to pick up more attention. By mid-afternoon the post had close to six hundred likes and my number of followers had doubled. (NB: I started out the day with forty-one.) By the end of the workday the post had received around a thousand likes, and my number of followers had multiplied sevenfold. That evening we had my parents and sister and brother-in-law over, and after dinner we sat around in my new library and watched the comments roll in. Most were expressions of envy or lust, declarations of similar goals, and requests that my dad adopt them and build them their own personal libraries. My dad smiled a lot. We laughed and made jokes. As I went to bed the post was approaching nine thousand likes and had over eleven hundred retweets and more than three hundred comments. I woke up the next morning, Wednesday, to over nineteen thousand likes and three thousand retweets, and my follower count had increased thirteenfold. The stats continued to climb throughout the day, and when I went to bed I had just under twenty-five thousand likes.

It garnered about a thousand more in the following two days, and by Friday evening the likes and retweets had slowed to a trickle. I now have close to 650 followers. The typical life cycle of a viral post.

All in all, my experience was small potatoes. A day or two of excitement, a weird sort of surprise notoriety, and then, as is the case with social media—by design in fact—it was pretty much forgotten. A blip on the radar.

Some background. Early this summer my family and I moved in with my parents. We all already lived in the same small Kansas town. My wife and I have four kids, and we value the role my parents play in their lives. We’d like my parents to be around to help raise them. And we’d like to be around for my parents when they grow older. Not to mention that it would be financially advantageous for all of us.

If my own very small experience had such a powerful social and psychological pull, how does anybody who’s even a very minor social media celebrity have anything approaching a normal life?

We decided we’d sell our house, my parents would move into their basement, and we’d move into the main floor and build an addition to make room for our family. When we moved in I needed a place to put my many books. My dad, always eager for a project, agreed to fill all the wall space in the addition with bookshelves—not too fancy but sturdy, made of real wood, tasteful. I was justly proud of my dad’s work and wanted to honour him for his generosity. (I only paid for the supplies; he supplied the skill and labour and time.) So my wife and I took my dad and mom out for a nice French dinner and booked them a night at an elegant hotel. Then I posted the pictures on Twitter, mentioning that he had built the bookcases. Then, of course, it went viral.

I do not have an expansive social media presence. I am on Facebook and Twitter, but I try to keep a certain critical distance, knowing that I will not regret conversations had or books read, but I will regret hours spent scrolling through feeds and arguing with strangers. The irony was not lost on me that as I watched the likes tick into the thousands I became glued to Twitter. I hovered over my computer screen counting the clicks from people otherwise unknown to me who pined to luxuriate in the very room I was sitting in. I observed in a follow-up tweet (currently at twenty-four likes) that Walker Percy could have made a lot of hay with this scenario. Even the person who luxuriates in the beautiful room with beautiful bookcases (i.e., me) will be aware of their luxuriating in it, and will take as much pleasure from the idea of luxuriating as they will from luxuriating itself. In order to reassure themselves of their own luxury, that same person (again, me) feels the need to further certify the space by photographing it and publishing it online so that it (or rather he, or rather I) becomes a real, actual thing in the world. Every like is a certification that I exist.

This desire to see your own reality mediated back to you is a distinctly modern impulse, and a really weird one at that. I got twenty-five thousand certifications, and boy did it feel good. But it was also unsettling to me that it felt so good. Practically all I did the two days while the tweet was peaking was look at comments and likes and retweets and follows, and reply when necessary. And when I wasn’t doing that, I was happy just to sit there watching the ticker go up, every notification providing a little hit of endorphins.

If my own very small experience had such a powerful social and psychological pull, how does anybody who’s even a very minor social media celebrity have anything approaching a normal life? How would they ever be able to view their own sense of validation through anything other than their own existence being mediated back to them by strangers?

While it was gratifying, almost immediately I could tell it was awful for me. I suddenly had trouble gauging what was normal. Every little interaction was now performative. I found that I was scrutinizing my every keystroke, because every keystroke was under a new kind of scrutiny. During those two days of peak virality it was interesting to watch myself phase in and out of this new sort of self-awareness. In the moment I would come to myself and realize how absurd and laughable it all was. I had to exercise a sort of discipline to remind myself of the sheer triviality of what I was experiencing. So I’d log off Twitter and try to move on with my day. But it wouldn’t be very long before my hand started twitching toward my mouse. I knew people were saying things about my post. What were they saying? And then it wouldn’t be long before I’d go check the latest numbers and comments. This pattern played itself out pretty regularly. Because the thing is, my conscious mind says, it’s just Twitter, it doesn’t mean anything. But my amygdala says, “Hot damn! MORE OF THIS!” How long would it take before that self-awareness wore off? How long before the impulse to check myself became imperceptible, or I learned to ignore it, or it just evaporated altogether? How long before I was immune to the surreality, the strangeness, the unnaturalness of this kind of phenomenon, of going viral?

It occurs to me that this surreal, absurd world of constant mediated performativity is the one we already live in. Our national discourse is now shaped by these psychological dynamics. And success is gauged by how good we are at putting ourselves into this bizarre moral situation. This experience of mine is really just social media on hyperdrive. It makes me wonder how much of this mindset I’ve already assimilated. Probably more than I think.

What a weird society we live in.

It turns out it really is a discipline to curtail the deleterious social effects of social media. The discipline of attention to the present moment and to the desires of others rather than oneself is not innate. It is a virtue that takes effort and practice to develop. Maybe I’m no more virtuous than most at keeping social media at arm’s length. I just haven’t had the opportunity to play out my narcissism on a larger stage. My follow-up posts on Twitter are back down to the standard three or four likes apiece.

A pragmatically minded friend asked me at one point why it was that this particular tweet was taking off. As a friend he was happy for me, because he knew me and he knew the space. But why were all these strangers entranced? Folks have seen books, a bookshelf, and a piano before, right?

The discipline of attention to the present moment and to the desires of others rather than oneself is not innate. It is a virtue that takes effort and practice to develop.

After suppressing my mild annoyance that he wasn’t falling in line with the near universal praise I was receiving, I had to admit I didn’t really know. But I gave it some thought. I think on one level it’s a beautiful, even erotic space. I wanted it to be a room that pulled you in through desire. And for that reason, on social media, it struck an almost pornographic chord in people’s psyches. A nonsexual lust for beautiful spaces and things is a weird kind of consumerist vice that drives a lot of traffic on social media sites, especially Pinterest. I grant that, and I feel kind of dirty for having inadvertently participated in it. I think there’s a deeper impulse at work, however—maybe not wholly extricable from the lust factor, but more wholesome. In the fragmented, alienated world of Twitter, these were photographs of a home, and they were photographs of a home that had the generational continuity of an intact, functional family literally built into it. It was just a few photos on Twitter, but the photos were also the coalescing of many decisions that brought me together with my father and my mother, and brought us together in a common space defined by supposedly unambitious, old-fashioned decisions of love for and commitment to each other. Most of that, of course, wasn’t communicated explicitly in that single tweet, but some of it, I think, came through in an intangible way. Maybe the combination of beauty, home, and family taps into a latent desire for these things that the diasporic modern urban world of the Twitterati finds it difficult to acknowledge until it’s confronted with it. I was surprised by how little negativity there was, actually. I kind of waited for it to drop, but it never really did. And judging by the bios I read when I hovered over the profile pics, those desires were not restricted to any ideological, political, ethnic, or religious tribe.

If I was going to go viral over something, I suppose I’d want it to be over something like this. Over a particular place in the world filled with the people and the things I love. People’s lives are ruined every day by accidentally viral tweets. I’ll count my blessings. I have many of them.