SIX QUESTIONS . . . As a Christian, I believe that I am called to use my research, writing, and analytical skills to shed light on the issues of injustice, poverty, and underdevelopment, which are so prevalent in Africa. 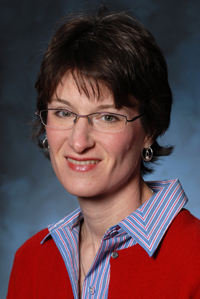 Amy Patterson is Professor in the Department of Political Science at Calvin College, Grand Rapids, Michigan. She most recently authored The Church and AIDS in Africa: The Politics of Ambiguity (FirstForum Press, 2011). She has conducted fieldwork in Senegal, Ghana, and Zambia. She teaches courses on international relations, global health and development, and African politics.

Amy Patterson: I am a political scientist with a specialization in African politics. My most recent academic research has looked at the role of support groups for people living with HIV and AIDS in promoting empowerment and citizenship among their members. For six months in 2011, I conducted interviews among these groups in poor neighbourhoods in urban Zambia. Some of these support groups were secular and some were affiliated with churches, a fact which enabled me to see the ways that spirituality and church institutional structures can influence community mobilization on HIV and AIDS. I was curious about the ways these new types of health-related associations could encourage notions of rights and responsibilities among their members-particularly in the African context, where the state is weak and individuals often look to non-state actors to define their identities. For many of the individuals I interviewed, religious faith (most Zambians are Christian) influenced notions of citizenship, and it shaped how they addressed issues of poverty and HIV/AIDS. The outcome of my research will help scholars better understand the role of non-state actors in addressing Africa’s crucial socioeconomic problems. Through the investigation I also hope to point to the many assets of African communities: their ability to adapt to changing situations, the fluidity found in local institutions, and the ability of local groups to link to transnational actors.

Who is the “public” for your work—who is it for, and how does it affect the lives of those who engage with it?

There are basically three audiences for my work: scholars interested in African politics and society; practitioners working in local communities to address HIV and AIDS; and people living with HIV and AIDS in Africa. The scholarly community is probably the easiest to reach, since I present papers at conferences and write academic books and articles. Yet I also conduct the investigations that I do in hopes that AIDS activists, NGO officials, and church leaders will gain insight about the political dynamics that affect local responses to HIV and AIDS. As such, I have interacted with practitioners through interactions with UNAIDS, the International Research Network on Religion and AIDS in Africa, and religious leaders in Ghana, Uganda, and Zambia. The most important audience is people living with HIV. I have sought to share my findings with local Zambian AIDS groups, both informally and through written reports. I hope that my “outsider perspective” on collective action will help these groups develop new ideas on program design and member participation.

Why do you do what you do?

I have been intrigued by African politics and society since I was a Peace Corps volunteer in Senegal in the late 1980s. As a volunteer, I soon discovered the crucial role that politics plays in local development efforts. I also found that I loved Africa’s diversity and beauty. Since my Peace Corps days, I have travelled to several African countries and conducted research in Senegal, Ghana, and Zambia. As a Christian, I believe that I am called to use my research, writing, and analytical skills to shed light on the issues of injustice, poverty, and underdevelopment that are so prevalent in Africa. I also believe I am called to share my insights with my students and other scholars. As such, I teach classes on international development, African politics, and global democratization at Calvin College.

What skills, proficiencies, and virtues does this work develop in you?

I believe my work in Africa constantly teaches me humility. My knowledge about politics, HIV/AIDS, and development is so small compared to the people I interviewed in Zambia. During my African research, I recognize again and again how much I can learn from others. In Zambia, I was often inspired by the ways that the HIV-positive individuals I interviewed contributed greatly to their communities. My years in Africa have also taught me to see political issues in shades of grey; that is, I have greater appreciation for the nuances of patrimonial relationships in a Senegalese village or the complexities of donor-state relations on HIV/AIDS policies.

What five books would you recommend to someone interested in understanding or pursuing the sort of work you do?

Paul Farmer, Pathologies of Power: Health, Human Rights and the New War on the Poor (University of California Press, 2005)

What do you do for fun?

For fun, I spend time with my children-reading, playing games, and cooking. I also run, ballroom dance with my husband, and read novels.

Edna Andrade.MMaybe scholars and collectors of manuscripts are afflicted by an ungentle madness:Frederic Madden had his own neuroses. He maintained a lifelong rivalry of near-deranged intensity with Anthony Panizzi, the British Museum’s keeper of printed books and...