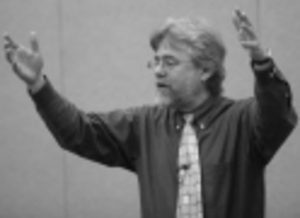 Sixteenth in an expert series on must-read books.

Comment readers clearly appreciate the long-form essay, and Sanders is a master of the genre- esteemed greatly by those who read modern essays. Many insist that he is one of the wiser writers on the planet. He is known not only for speaking at writing conferences and in literary circles, but he is also a popular memoirist, storyteller, and a renowned naturalist. Sanders has long been a friend of Wendell Berry so it comes as no surprise to learn that he has written evocatively about a sense of place and the importance of family. (His Staying Put: Making a Home in a Restless World comes to mind as a beautiful example.) This new anthology gathers Sanders’s pieces-including some new ones-on conservation, awe, the mystique of money, the ideology of consumerism, and how to shift to a vision of ecological sustainability. Lewis Hyde notes that his is “a voice to dispel confusion and keep us well-rooted.” Highly recommended.

A Faith of Our Own: Following Jesus Beyond the Culture Wars by Jonathan Merritt (FaithWords, 2012)

Many of us know Merritt from his short and pithy essays in Huffington Post, Q Ideas, Relevant, USA Today and other national journals. He has helped the “next Christians” (such as Gabe Lyons, author of Next Christians) forge a nonpartisan voice for younger evangelicals who offer a critique of the religious right but who do not necessarily embrace the Christian left. Merritt was raised in the bosom of the religious and social conservatism in the U.S.; his father was good friends with Jerry Falwell and remains a leader in the conservative Southern Baptist Convention. In this moving book-part memoir, part analysis-Merritt speaks powerfully about his work to raise Biblically faithful concerns (about creation care or poverty, for instance) within his own denominational structures. Some of this is truly harrowing, some is heartbreaking, but for younger readers, it will serve as a great guide to a “post-culture wars” orientation, as he so clearly expresses what so many intuit. For those of us who have been at this a while, it is reassuring and hopeful to read such a book and know that there is this new current within evangelicalism which cares so deeply about the common good. A forward by Kirsten Powers (Fox News political analyst and a USA Today contributor), where she tells of her own journey to faith among the Keller-Tyson Presbyterian network in NYC, reminds us that this book comes “not a moment too soon.”

Go + Do: Daring to Change the World One Story at a Time by Jay Milbrandt (Tyndale, 2012)

This is an upbeat and hopeful book, a gathering of reflections offering astute observations about third world development, legal issues, social justice, and human rights-“one story at a time.” Milbrandt is an energetic attorney with a pretty exciting story of his own. He serves as the director of the Global Justice Program at Pepperdine University School of Law, a program helping law students take up callings in some of the rougher parts of the world, advancing global initiatives for justice. This is both a general book for nearly any reader and an inspiring call to clarify life’s biggest questions about our purpose, the possibilities of fresh starts and serious engagements with the “raw edges of humanity.” It is also nicely informative about many specific issues that capture our attention-including African warfare, religious freedom, sexual trafficking, and refugee resettlement. But the learning comes easily, embedded in stories and hopeful examples of Christ-centred social change. There are significant endorsements from his colleagues in the legal education and public justice advocacy (Kenneth Starr, President of Baylor University, for instance, and Richard Stearns of World Vision). But I love the whimsy of his good friend Bob Goff: “Equal parts guts and grit, Go + Do reminds us all that we have an important role to play in transforming the world. You might be surprised what you will accomplish when you take your passions out for a lap around the world.”

Those of us who love books, who enjoy being taken in by a good play or film, who appreciate fine writing, sometimes wonder where it all comes from (other than the most profound answer, that we image a creative, storytelling Creator who, as God, is incarnated as Word). It is a joy, and not just a bit fruitful, to ponder what those with other worldviews and visions have to say as they weigh in on this remarkably generative question. Few scholars have approached this with as much wonder and delight as Gottschall (himself an English professor, named by Harvard’s Steven Pinker as a “brilliant young scholar”). Paul Bloom, author of How Pleasure Works, notes that it is “boundlessly interesting, filled with great observations and clever insights about television, books, movies, and more. And it is beautifully written-fittingly enough, Gottschall is himself a skilled storyteller.” I couldn’t agree more. One need not accept his largely evolutionary account of the development of the human capacity for story or his take on the origins of these habits of mind to benefit from this book; he is correct that we live in a world of narrative. Highly recommended, to be read and discussed with discernment.

I am quite grateful that a few more accessible books have been added to the new “Square Inch” imprint of Faith Alive, the Christian Reformed Church’s publishing house. Here, we have an absolutely wonderful, easily approached, yet solidly developed study of the canon of the Hebrew Psalter. Whether they are sung or whispered or groaned (by Muslims, Jews, Protestants, or Catholics), the Psalms express our deepest human feelings, our joys and sorrows, faith and desperation. Written seriously with a light touch-bringing in other writers and artists as diverse as Bob Marley and J.S. Bach-Adams shows how our unpredictable God remains faithful amid human hardship, and how the Psalms can help construe our own life story. He writes well and obviously has mature insights emerging from pastoral experience with these ancient texts. I love James K.A. Smith’s great back-cover blurb: “The psalms are like the gift of tongues; they are the way the Spirit gives us words when we don’t know how to pray. This marvelous book is also a gift, inviting us to see the psalms anew-as ancient prayer book that speaks poignantly to our postmodern context.” If that doesn’t make you want to order this, listen to what Neal Plantinga playfully says: “If you can’t find yourself in this amazing tour of life, you aren’t fully human. If C.S. Lewis were a 21st century church planter, he would write this book.”