I laid breathless on my back, staring in the direction where my feet would normally be, at an enormous, bulging belly. I gently caressed the ball-shaped appendage, shooting Dave an assuring grin and a thumbs-up as it tightened and relaxed through contractions. The thin paper liner crinkled beneath the weight of my very pregnant body.

I was in full-blown labour, a bit of news that had taken us by surprise that sunny April morning, just three days short of our scheduled C-section.

I stared in silent awe at how life hidden in a distant world beneath layers of skin, tissue, and a pale blue hospital gown could suddenly decide it was ready to make its grand debut in our world. What an epic journey, I thought, for such a tiny person to make.

As they transported me into labour and delivery, my heart began to race with excitement. The moment had finally arrived after a year-long battle with infertility, followed by nine months of bed-ridden, high-risk pregnancy. It was all about to erupt into the joyous celebration of a new life in our arms.

At 12:04 p.m., we heard the first blessed shout erupt from our daughter’s lips, a beautiful baby girl named Grace.

As they placed her tiny body on mine, I experienced for the first time what it feels like to be involuntarily and completely owned by love.

“Remarkable,” I heard myself say, staring into her tiny face. “You are remarkable.”

As we settled into our room, staring in love-struck silence at the newest member of our family, a nurse came in to take Grace for her bath and bloodwork. With a gentle kiss, we handed her over.

Everything that ensued after that moment was a blur.

An hour passed and no sign of our nurse or Grace.

With anesthesia from the surgery slowly wearing off, I asked Dave to go see what was taking so long. Something inside me was starting to panic.

No sooner had I asked Dave to go check on thing when we heard a knock on the door. Three doctors entered our room with a solemn look on their faces, and still no Grace.

One of the doctors broke the silence before either of us had a chance to speak.

“We have some news about your daughter,” she said.

The room began to spin around me. I felt tears starting to form before she was even able to get out the next phrase.

“It appears Grace has soft markers for Trisomy 21, or Down syndrome,” she continued.

Impossible, was my immediate thought. That can’t be. I saw her. She is perfect.

“We have also detected a small hole in her heart that we feel needs to be monitored. These sometimes close on their own, and sometimes they require surgery.”

My tidal wave of panic started giving way to nausea. I felt a deep groan emerge from some place deep inside. Surely this was the full extent of the ammunition this firing squad had come to deliver.

But there was more. The third doctor chimed in.

“We have also detected a high white blood cell count and a fever, indicating that Grace is battling an infection. We are not equipped at this hospital to care for her infection or her heart, so we will have to transport her to a NICU across town. You, unfortunately, will not be allowed to go with her due to insurance requirements. Your husband can drive separately to that hospital once she is there and settled.”

With heart pounding, tears flowing, incision throbbing, and drugs surging, the only response I could muster to this trifecta of devastation was simply to ask that they please have the nurse bring her back to us.

“I just need to see Grace.” I sobbed.

The firing squad left. Shell-shocked in the rubble and debris of what felt like an endless string of sucker punches, Dave and I sat holding each other in silence.

Torn between rage at how that conversation had just gone down and the agony of the news that I was being separated from the person I had been carrying inside me, we were now facing the petrifying news that something about our child was “wrong.” Two nurses appeared in the haze, wheeling a clear, rectangular box into our room.

There, sleeping peacefully inside the box, blissfully unaware that anything was amiss, was the crown jewel of my life. The box had two arm holes through which Dave and I could extend gloved hands to caress her precious head and bless our baby with peace before they took her from us to a faraway place among strangers, who we could only hope would fight for her in the exact same way that we would.

Agony. That’s the only word I have to describe that moment. Total and complete agony.

An hour later, I found myself alone in my hospital room, balled up on the bed like a maternal orphan, without baby or husband, weeping uncontrollably as my body shook under the catastrophic news now sitting on top of me.

I held my breath, weary from sobbing and labour and engulfed in the pain of it all. “The lines,” the voice tenderly whispered, “have fallen for me in pleasant places, indeed I have a beautiful inheritance.”

It was repeated several times. My body relaxed and uncoiled. I took a deep breath and repeated the words out loud in the darkness. Feeling half crazy, but also tangibly relieved, the room suddenly felt lighter, as if someone had sucked out the panic and fear and replaced it with hope.

A memory from the year before started fading in. Dave and I had been invited to attend a gathering of families of adults with special needs at a local high school to commemorate a federal grant they had received. Dave was the keynote speaker, so I sat out in the audience alone, uncomfortable among the families packed into the tiny school cafeteria.

One family sitting directly across from me had a son who looked to be about nineteen with Down syndrome. He continually jumped up from his seat throughout the ceremony to greet and hug people around the room. His behaviour was not disruptive, but it wasn’t exactly normal either. I was struck by how his parents didn’t seem to mind these repeated outbursts, as he popped up again and again to go and embrace every familiar face he saw. It was striking, their joy, but something about it made me want to run.

One year later, and the threat of that encounter began to reveal itself for what it was: a fear of surrender. Grace was bringing me face-to-face with my need to control, and, still more ugly, my distaste of the “not normal.”

Every one of us is given an invitation to challenge our paradigms. Grace was mine. She came swooping in like a wrecking ball, presenting me with an opportunity to face the flawed lens through which I was looking at life. Years of living in a world of “ought to” and “should” had left me ill-equipped to embrace the gift I was being given, but somehow I knew freedom lived on the other side. On the day Grace was born, I was forced to release my paradigms of “normal” and “good” and “deserved.” On the day Grace was born, I had to die.

And she’s changed our lives. Refusing to be bothered by the chaos and fear thrust upon us on the day of her birth, she remains fearless to this day, overflowing with love as she hugs strangers and makes new friends in every place she steps, much like that young man we met that day in the cafeteria. Grace has a way of making me uncomfortable. She’s shown me that I have permission to redefine everything, including success, purpose, abilities, gifts, even my own value, destiny, and sense of belonging.

As renowned author and clinical physiologist Dr. Shefali Tsabary says, “You went on the conveyer belt of the system we call childhood, where you do, do, do, accomplish, fit in, belong, and slowly you shed who you authentically are.”

Grace called everything on that conveyer belt into question for us, exposing the lie that higher incomes, bigger houses, nicer cars, and more influential circles could somehow equal success or satisfy our deepest longings. She blew up that system of doing with her incredible gift of being. And above all, she reminded us that our deepest places of pain and loss can become our gateways to freedom.

This essay is an edited excerpt from Erin Leaverton’s upcoming memoir, Finding Home, which recounts how the news of their daughter’s diagnosis led Erin and David Leaverton to a profound choice: to see Grace through the world’s eyes or to see the world through Grace’s. 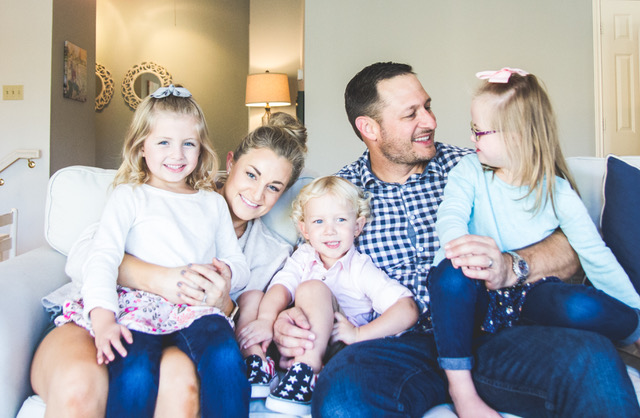