A wunderkammer of discoveries, compiled by Comment and illuminated for our readers’ edification and entertainment. We do not necessarily endorse the external content below.

Comment author Jedd Medefind, in his new role as executive director of the Christian Alliance for Orphans in California, launched the “Orphans Deserve Better” campaign last week: a grassroots initiative to counter the forthcoming Warner Brothers film Orphan. While directly confronting the movie (“However far-fetched some stories are, they can still subtly shape our values and perceptions”), the campaign seeks to positively and winsomely present the real narrative of the 145 million orphans across the world. 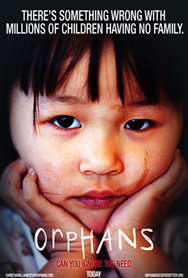 Consider joining the Alliance’s campaign to defend the cause of the fatherless, by signing the petition and promoting eight other ways to aid orphans.

. . . Cardus Research Fellow Geoff Ryan appeared this week on Listen Up TV, hosted by Comment author Lorna Dueck. Ryan spoke on urban poverty, focusing on his neighbourhood of Regent Park in Toronto, where he is a Salvation Army major developing new ideas for living, and beating poverty, side-by-side. Watch the full episode here.

. . . And finally, Cardus and its supporters congratulate the Centre for Cultural Renewal on its choice of one of Canada’s most distinguished writers and editors, Peter Stockland, as its new executive director. A friend of Cardus who has spoken at our events and whose book review was recently published in Policy in Public, Mr. Stockland is a former professional colleague and continues to be a close friend of Cardus Senior Fellow Peter Menzies. We wish Mr. Stockland and the Centre for Cultural Renewal godspeed in their future endeavours.