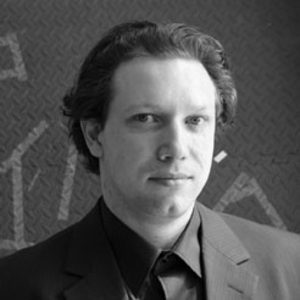 There is something direct and authentic about Kenneth Steinbach's drawings that bypasses much of contemporary art theory, and makes them readily accessible to almost any viewer.

One of the most surprising exhibitions of this past year was a modest assembly of ten unconventional drawings, created by ink suspended in layers of epoxy resin on aluminum, by Kenneth Steinbach. The show (May 15 – July 10, 2009) was held at Christensen Center Gallery at Augsburg College, in Minneapolis, Minnesota. At first unassuming, these works challenge many widely-held conceptions of how a work of visual art may materialize faith.

Steinbach’s art is not immediately or evidently “Christian.” His drawings, such as Tape recorder, Paper bags, Lost Glove and Pistol, do not depict religious iconography, and he does not illustrate Bible stories. Steinbach’s art is a practice of faith realized in forms that materialize a transformed vision. His drawings are created by an unorthodox process of adoption and revision that parallels a life of faith.

Steinbach’s drawings represent objects he found (a lost glove), inherited (a pistol), or that came into his possession by chance (a paper bag). His creative process begins with recognizing these objects as more than stray items and accidental discoveries. Steinbach’s art highlights the potential consequence of every encounter. His attention to these objects demonstrates a recognition that everything—no matter how small, unusual or seemingly worthless—enters our lives by divine grace. Therefore, everything is a gift of God.

Our lives are often so densely packed (some may say cluttered) with so many things that we cannot be properly attentive to any of them. Works of art such as Steinbach’s can cause us to pause and reorient our perception.

In creating his works, Steinbach draws and redraws the object into layers of semi-transparent resin. A work such as 53 binoculars has as many as 53 individual drawings of a found pair of non-functioning binoculars in many more layers of resin. Each freehand drawing is slightly different from the others, capturing a unique moment of sight. By overlaying—without directly superimposing—the drawings, the final result is a visually and conceptually complex study of the object’s form and significance. Steinbach says,

I am fascinated by the idea that the rendering of an object repeatedly, over time, creates a three-dimensional form; it is a transition from the ‘painter’s window’ into a solid object. The layering is not just about stacking images; it is about the cumulative effect of such consideration. The process has an ‘ex nihilo’ quality about it, an object created principally from the process of consideration, of observation.

Drawing together a precision of line and ambiguity of depiction, Steinbach’s drawings establish an interchange between material and form as well as between thought and sight. Furthermore, as they are illuminated in the gallery, the light is reflected by the drawing’s aluminum backing and fills the works with fluorescence. These resin objects establish a tension between the hard surface and the soft glow of their inner volume. (When was the last time one could describe a drawing as a volume of light?) In this suspended presence, Steinbach draws us into an indeterminate space where we encounter the rendered object in an in-between state, such that it is no longer what it was, but is not yet what it will become.

These objects, as Steinbach finds them, are neither uniquely beautiful nor distinctly meaningful nor particularly valuable. They seem to have no evident or inherent quality that should attract him to them. In drawing them, through a process of concentrated and lasting observation, Steinbach adopts these objects as his own. However, this process involves a two-way transformation by which artist and object affect each other. In fact, these objects become not only a part of Steinbach’s art—they become a part of him. In showing them as he sees them, these objects take on new value, meaning and beauty.

Finally, each work of art becomes a means by which the viewer is allowed to enter into, and to extend, the exchange between artist and object. To view Steinbach’s art is to be transformed by it. There is something direct and authentic about these drawings that bypasses much of contemporary art theory. Although these works are conceptually sophisticated and participate in a contemporary dialogue about the nature of our processes of perception and our relationship to everyday experience, they can be readily accessible to almost any viewer. They don’t flaunt their aesthetic refinement or conceptual complexity.

Looking at Steinbach’s Paper bags or Lost Glove, I feel a sympathy with the object. (To say that I feel sympathy for these objects suggests too much distance, as if this object remained other than me.) Even though I was only able to see the exhibition for a few minutes, the experience of these works, as well as the opportunity to visit Steinbach’s studio and observe his creative process, has stayed with me. I had adopted these works of art as my own.