Something beautiful in Hollywood

Meet Eduardo Verástegui. He’s been called the “Brad Pitt of Mexico” and a “Tijuana Tom Cruise.” He stars in Bella, a film that garnered number-one rankings since it appeared in U.S. theaters last month—a film that won the Toronto Film Festival in 2006 and is in the running for an Oscar. To put it mildly, Verástegui is a heartthrob, and his talent and passion is touching hearts. 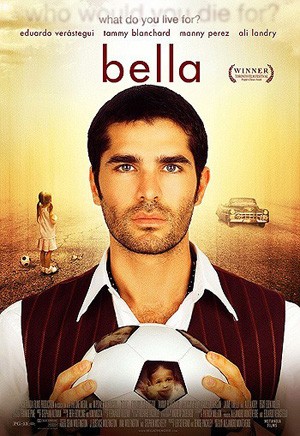 “True love goes beyond romance,” reads one of Bella‘s promotional posters, “One day can change your life forever.” Bella‘s main story-line spans just twenty-four hours, beginning when “Nina” (Tammy Blanchard), an attractive waitress in New York City, learns that she is pregnant. Her life spirals out of control as right and wrong, present and future, hope and heartache jumble together. By an unfortunate turn of events, Nina is fired from the Mexican restaurant where she works, and the head chef “JosÃ©” (Verástegui) leaves his post to run after her. Prudence or impulse, charity or craziness? Sometimes the heart speaks louder than reason, and its reasons are the deepest.

Through his own life journey, Verástegui knows the feeling. Growing up on a sugar cane farm in the Mexican village of Xicotencatl, Tamaulipas, his original goal was to become a lawyer. But he soon discovered that this path did not seize his passion, and at age seventeen he set off for Mexico City to enroll in acting school. A three-year stint with the Latin-pop group “Kairo” followed, after which he dabbled in modelling and solo musical performance before finding real stardom in “telenovelas,” or Latin soap operas. Five years, hundreds of magazine covers, and countless fan letters later, he felt a familiar tug at his heart return. The tug to do something more, to be something more. He just didn’t know how, where, or, even, why.

Verástegui set off for Miami where through luck or grace he caught the eye of a casting director for 20th Century Fox. He was talked into auditioning for a new film. He barely spoke English, but he practiced his script with determination and won the lead role in Chasing Papi. More movie contracts followed, and Verástegui—named one of People en Espagnol‘s “50 Most Beautiful People”—found himself typecast as the Latino Don Juan, playing the part all too well. That is, until he met a wise woman—a woman who taught him to speak English, a woman who taught him to speak to God. “How are you using your talent? Who is God in your life?” she challenged him. He had no answers and he knew it. Verástegui recounts:

We [Latinos] have been stereotyped in movies as banditos, drunkards, prostitutes, criminals. And if you’re good looking, then you’re a Casanova, a womanizer, and a liar. And that’s the person I had become. But this woman opened my eyes to the grace of God . . . God changed my heart and I had to repent of my past. And from that day on, I promised that I would never do anything that would offend God or my Latino heritage. I would never do anything to compromise my faith. That’s the moment I realized that the purpose of my life was to know and to love God.

But the narrow way is rarely easy, especially when it runs through Hollywood. Verástegui began turning down roles, all of which bolstered negative stereotypes. Finally, on the brink of homelessness but rich with conviction, he met a kindred spirit. Alejandro Gomez Monteverde, an aspiring young screen writer, joined him in optimistic penury. Not long after meeting, the two met a former 20th Century Fox business director, Leo Severino. It was 2004 and “the three Amigos”—determined, in their own words, to “entertain, engage, and inspire”—founded Metanoia Films. All they needed was money, a script, and an audience. With persistence and prayer, that’s what they got.

Verástegui and Severino went to see another man dedicated to engaging and inspiring the world—one who also knew the world of acting: John Paul II. And they received his papal blessing. When entrepreneur Sean Wolfington decided, just ten days later to fund the project, the three amigos thanked their spiritual father and example. But Bella is not a Catholic film nor is it specifically Christian.

“We don’t want to label our company,” says Verástegui. “We want to be just another production company in Hollywood.”

“We wanted to do a story that would appeal to universal audiences,” Severino adds. So far he has seen success:

What we’ve found is no matter what the background is, people who’ve seen the film leave the theater touched and moved, and I think it’s because we’re speaking to them truth that’s already written on their heart, truth about the beauty of life, the dignity of the human person, issues of social justice, issues of family, so many things that just ring true to the human heart.

That is the beauty of speaking the truth. It doesn’t need picket signs or propaganda but, as the Apostle Paul says, it is written on human hearts. Granted, some hearts are scratched and dusty, and that is where great works of literature, art, and film figure in. They show us the way things are—the way things could be, might be, should be. Their makers don’t preach to the choir. They don’t preach at all. As Monteverde stresses, he took pains “never [to] come across as judgmental. If we come across that way, we lose the whole purpose of the film.” 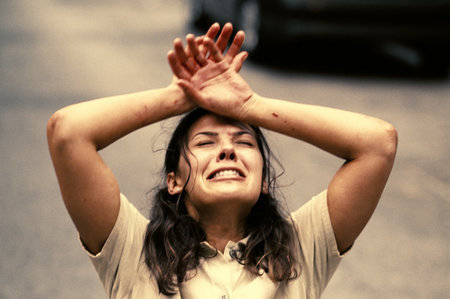 In November, Verástegui was interviewed by American Idol host Ryan Seacrest. There, the lead actor reiterated his hope of reversing the negative Latino stereotypes prevalent in movies and TV shows—the stereotypes that portray men as Casanovas and banditos, and women as objects. “Bella shows the real faith of Latinos,” Verástegui told Seacrest. “It celebrates our culture!” With the character of JosÃ©, gentle and full of strength, passionate and compassionate, that is what he does. As the film opens, Nina learns that she is pregnant, unemployed, and very much alone. More than anything, she needs the support of friendship. JosÃ©, the chef who follows her out the door, gives that unhesitatingly.

At this point, the film could be swallowed up by mushy pathos. Instead, sappiness is kept to a minimum. JosÃ© and Nina elbow onto a subway car where an impromptu percussion concert starts up, they roam through a flea market with all its claustrophobic tawdry, and they stop in a corner grocery and witness a shouting match. All very “New York,” and more scruffy than saccharine.

Placed in the Hollywood jungle

Without doubt, however, Bella is an emotional film. It is about celebrating Hispanic culture but, more fundamentally, it portrays the beauty of human life. Gradually, JosÃ© learns that Nina plans to “have it taken care of,” because, as she puts it, an abortion is clearly what’s best for her. He does not lecture, just gently suggests adoption, and initially she is undeterred. We follow the couple back to the home of JosÃ©’s parents and meet his lively but caring Latino family. And with Nina, we discover that adoption can form deep relationships. More poignantly, though, we realize that JosÃ© too has had to suffer, and his suffering is not unlike Nina’s own. For both, however, there is hope: the hope of life and the hope of love. I won’t give away the end, but those who have started painting a happily-ever-after conclusion should think about Monteverde’s words:

I wanted to write a love story that isn’t just about the romance between a man and a woman, but about self-sacrificial love—and a story about how each other’s pain becomes each other’s redemption. And I wanted to make a film that shows there’s always a choice that doesn’t have to lead to moral pain.

Real life isn’t perfect. Real life can be painfully confusing, and we rarely know how its details will turn out. As Bella tries to show—and as its makers can attest—when life and faith, love and family are given priority, God takes care of the details. Shortly after his conversion, Verástegui decided that he must do something to make amends for his past life and to renew his culture. He contemplated becoming a missionary or even a monk. But his pastor just laughed: “No, no, no, you’re not going anywhere. We have plenty of missionaries over there in that jungle. But you know what, we have very few here in Hollywood. And this is a bigger jungle. Our Lord put you right there for a reason.”

Bella has already moved many audiences and will doubtless continue to do so. It has charm, zest, and beauty, but it is just one first step in the renewal of media and culture. Verástegui whole-heartedly agrees, “By example, first, [I’m] trying my best every day to be involved in projects that will inspire people to use their talents to do something positive for the world.” This is the challenge of Christianity—the challenge facing everyone in whatever state of life. As Catherine of Siena, a bold and faith-filled woman, proclaimed over 600 years ago, “If you are what you should be, you will set the whole world ablaze.”