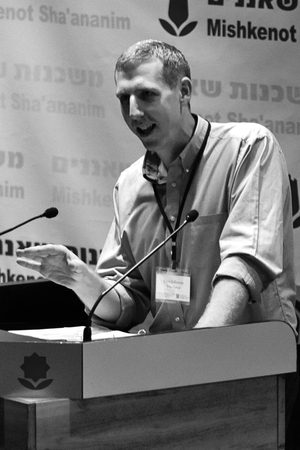 Up All Night is at its best when it is focused on this postpartum transformation: from our carefully cultivated identities before children to the reality that we are actually just managing intrusive chaos.

If there’s ever an appropriate time to curse, it’s in the moment captured in the opening scene of the television show Up All Night. As two new parents gawk and hover over their first-born in her crib, they cannot help but to use expletives to express their awe: “She’s so ####-ing beautiful.” Mom and Dad chastise each other for cussing in front of their infant, but viewers can appreciate the sentiment—the genuine display of profound awe at one’s offspring ex utero; those who have experienced it understand that inexplicable sense of reverence.

When we have children—especially the first one—we are forced to soberly face a duality which we cannot reconcile: awe and horror. New parents can only ogle, awed at the phenomenon and beauty of new life, while at the same time also feeling the burning dread at the implications of being manifestly responsible for that young life.

As has been noted elsewhere, Up All Night is one of several new shows spawned by Hannah Rosin’s article in The Atlantic, “The End of Men.” Rosin summarizes the trend in television sitcoms this way: “They all feature men who are unemployed or underemployed, love to play video games, and are desperately in need of a makeover.” Yet, for all this talk of the new breed of men qua juvenile wimps, which is certainly a source of minor comedy in Up All Night, it’s not what the writers attend to in the show’s narratives.

The parental roles played by Arnett and Applegate are sufficiently robust, but both actors derive their fame from inimitable, thin characters at whom we loved to sneer. If you are a Gen Xer or older, you’re probably a bit dazzled by the casting: who would have predicted that Will Arnett could break out of his magical characterization of G.O.B. (that is, George Oscar Bluth from Arrested Development) into a more nuanced role of a stay-at-home dad. And Christina Applegate liberates her persona, which has (arguably) been held hostage by the promiscuous and universally indiscriminate Kelly Bundy from Married With Children, by portraying a working mother in a functional family unit with whom viewers might actually empathize.

The show centres on the interplay between the parents: a stay-at-home dad (Arnett), who gives up his job at a law firm to be home with their daughter so that his wife (Applegate) can work. The story lines slump when the writers try to innovate (or enervate) a swapped-out version of the “traditional roles” where comedy is meant to ensue. For instance, the domestic dad gets upset when his wife works late or under-appreciates the romantic dinner he has made. While the occasional traditional role-swap scenes are often contrived, the cleverness of Up All Night is in the raw display of parental floundering, in moments of domestic chaos that are familiar to all parents, grandparents, and babysitters.

Up All Night effectively sketches out the liminal boundary of becoming a parent: stepping out of one well-worn and self-fashioned identity into a murky and chaotic morass of stress, screams, tenderness, feces, and so on. It’s not even an identity at first—just a wall of chaos. Most of us had that feeling when we took our first-born home from the hospital (or brought our adopted child home for the first time). We remember the thoughts that passed through our minds:

What are we supposed to do with this baby?
Shouldn’t there be some kind of an expert coming home with us?
I still cannot figure out how to change that thing’s diaper, and they’re just going to let me leave with it?

Those postpartum days are filled with a mixture of our awe at this new little life and our profound horror at our perceived inability to parent. This perception stems from reality: We cannot contrive a meaningful parenting solution to the myriad and erupting situations in our house. This devolution—from our ideal (read: naïvely Platonic) notion of parenting to the reality of our failure to “solve”—systematically disentangles the egoistic structuring of our lives up to that point. (As an aside: The labor and delivery episode brilliantly demonstrated the systematic denigration of dignity that new mothers experience. It was also the most realistic portrayal of a childbirth on fictional television that I have seen. The writers dragged viewers slowly through the crossing of that liminal boundary, from an overly modest young professional to a mom.)

Up All Night succeeds when it plays out this storyline, when we see these new parents struggling to realize who they really are now that his law practice and her management career no longer form a sufficient basis for their identities. The show does not concentrate on the characters’ careers as the core of their identities, but the writers do effectively hone in on the other half of the parenting transformation: accepting the ambiguity of what I term “parental chaos”—the foisting of an otherwise inconceivable situation upon new parents, which they must resolve. For instance, one might not have yet imagined a scenario where a human being had defecated, retrieved the feces, and then shoved it up their nose and rubbed it in their hair (or their sibling’s hair!). I don’t have to use my imagination here, only my memory. These moments of chaos press parents into action—and that pressure to act and the ensuing response become part of the new identification as “Mom” or “Dad,” an identification that is not predicated upon false notions of self or constructed upon carefully polished delusions of grandeur. In fact, it’s the opposite.

The relentless intrusion of children into our management schemes (impression management, schedule management, rest management, and so on) offer moms and dads an opportunity to be free from false notions of self, careerism, and the most permissible sins (perfectionism). Some have even argued that this is exactly what Jesus was doing with his own disciples, systematically stripping them of false notions of self and messianic romanticisms so that they could be free to be the fallible and responsible apostles that Jesus would then send out. (Hans Bayer explores this premise in detail in his forthcoming title, Following Mark’s Call: Christology and Discipleship in the Gospel of Mark.) Up All Night lets its viewers rest in the malaise of chaos, struggle, defeat, and repair without making us feel that success is necessarily measurable in anything other than a commitment to genuine and accountable love between parents, their children, and their wider community.

A similarly relentless intrusion happens in marriage (if not every human relationship). For instance, I did not have an appreciable grasp of what a dreadful sinner I was until I married. In marriage, I finally saw my sin reflected directly back to me in a 24-hour-a-day relationship where I was not allowed to retreat or manage the situation according to my ego. Likewise, I did not understand the communicable quality of sin—that the sins of the father pass to the children—until we brought our children into the house. There is nothing more painfully sobering than to watch my own patterns of sin spin and tangle into my children’s little bodies and hearts.

The crises created by these relentless intrusions and realizations are funded by that irresolvable duality: Our babies are beautiful, ####-ing beautiful at that, but we parents are not. We are cracked, split, and perforated by decades of experience. We parents often attempt to reconcile this duality of parenting, the awe and horror, by naïvely maintaining a perfect environment around our children. For multitudinous reasons (but most likely because of behaviourism), we try to be the parent that we believe we must be. But for most of us, that attempt at faux perfection usually collapses, which spins out cycles of regret and ends with us wresting control of anything that we can seize. We become weird doters who want to make everything perfect: perfect appearance (infant-sized North Face jackets, $100 shoes for babies who cannot even walk), perfect nutrition, perfect schooling, and so on. But it’s clear to those who have worn out this path that the solution might be found in being anti-dote: breaking the faux-perfect illusion.

Refreshingly, Up All Night subtly mocks these attempts to react to domestic chaos with the appearance of control. Despite the characters’ attempts to maintain a veneer of faultless parenting, the show instead depicts a fallible yet loving home life. Up All Night is at its best when it is focused on this postpartum transformation: from our carefully cultivated identities before children to the reality that we are actually just managing intrusive chaos. The transformation is complete when our true identity cannot hide behind our cultivated image anymore. It might even be the case that this transformation is God-sent, if we allow it to be; God wrests us, the real us, from our false notion of us. We are moms and dads, which means that our work-filled laptops, our ego-nuanced Facebook pages, our leather couches, our pretentious cars, and our pristine carpets are all things upon which our beautiful children will pee.

And that is okay.