The Tribes That Bind

Wrestling with loyalty in a fractured age.

I’ve participated in an unusual number of gatherings over the last six months convened to reckon with our deepening polarization in North American society: Why are we so divided? Is there any reason to hope we’ll be able to reknit our frayed affections? People kvetch from their location on the landscape—expertise, ideological lens, demographic identity, and personal experience all inflecting the perspectives shared.

I almost always leave these gatherings exhausted and with watery eyes, and not because something beautiful is breaking forth. It’s a violent experience to dive into the depths of the chasms at play—chasms in civic experience, social identity, historical perspective, and, crucially, visions of the good and conceptions of the true. Whether you’re having to reckon with the sins of distant forebears and the systems whose enduring biases they helped shape, or you’re asked to relive trauma either inherited or lived, or you’re simply trying to speak with nuance in an age that vaporizes complexity, we seem to be careening toward a holy war of untouchable subjectivities as the proverbial “centre” loses its legitimacy. Subjectivities that are deeply personal, inherently moral, with profound political and social ramifications.

“How will you address the impact white supremacy has had on you?” A friend emailed me in the aftermath of a speech I’d given introducing a vision to expand the slate of voices contributing to this magazine. “Is everyone really invited to your table?”

“I’m disappointed in the leftist politics promoted in your reading recommendations,” a subscriber wrote as we sent out a routine newsletter celebrating the work of an eclectic range of authors. “What agenda are you hoping to promote? I am wary of Comment’s future.”

An “ism” has crept into common parlance to diagnose our suspicious moods one to another: tribalism. I am uncomfortable with the catch-all because I grew up admiring indigenous wisdom—my mother having lived among Quechuas and passing along to me an abiding respect for tribal dignity in all its beauty. Still, “tribe” is the word the English language has to capture our primordial need to belong, to have membership, to find meaning within borders and exclusivities, to feel needed. Traditional elites cry out, “These passions are not what Enlightenment was supposed to yield,” ignoring that the passionless life is itself a type of tribal marker. The masses stick a thumb in their faces: “This is what your failed institutions and insular behaviours have enabled.”

And so we resort to an ancient survival mechanism activated when fear is kicked up and identities of all kinds are under siege: Find your team and defend it. It’s your only shot at significance and psychic sanity.

This winter issue is not an exhaustive account of why this kind of tribalism is taking over our life together, nor does it set out to judge those who radiate group righteousness more shrilly than others. These are confusing and tiring times, and we are all implicated. Still, it’s worth taking a moment to explore the prismatic meanings and manifestations of tribe as they are finding relief both today and yesteryear. What’s in the atmosphere such that we are turning to tribal conceptions of the good, refusing to engage broader, more complex canopies for the (inherently pluralistic) commons? Who amid our deepening factions is modelling the way of humility, and thus of innovation?

“The question for Western society isn’t why tribal life is so appealing,” wrote Sebastian Junger in his 2016 book, Tribe: On Homecoming and Belonging, “but why Western society is so unappealing.” He’s not wrong. From skyrocketing rates of loneliness (not enough relationships), to deepening division (dysfunctional relationships), to a creeping acedia incurred by mass-brand homogeneity, consumerism and digital anonymity, we don’t exactly find ourselves in a hemisphere offering reasons for self-sacrifice.

This cultural inertia hits men particularly hard, for reasons we’ll explore in a future issue, but it also afflicts societies that are as diverse as are Canada and the United States. If you lose a moral reason for being beyond the survival of your pride, of course you revert to the “isms” recognized—however caricatured—by those outside your group. The orthodoxies of ethno-nationalism, socialism, integralism, and all forms of victimizationalism provide the comfort of singular narratives that trade in the demands of human agency for the security of scapegoats and utopic promises. Abstractions feast on denuded lives. They’re also easier to love, as, unlike real relationships, they rarely demand that one search oneself.

We’re all looking to call a people our own. A people we can know and be known by, need and be needed by. The question is, How should this people be identified? At what point do we cross the line from a healthy sense of belonging to the dark side of tribalism? How do we maintain these small loyalties within a necessarily plural context? At what level do we need to agree with one another, and at what level does disagreement happen as a sign of social and civic health? By what measure can we adjudicate between the various goods and loyalties competing for our hearts?

I recently had the joy of learning from the painter Makoto Fujimura, whose visceral experience of trauma at Ground Zero on 9/11 transformed his vocation as an artist. He brought a few of us together to consider what the ancient Japanese craft of Kintsugi might have to teach an age of fracture, most of us burned from trying to build bridges in our respective fields at a time when no one wants to hear, “Love your enemies.” Kintsugi is a traditional way of mending broken pottery—it uses a shimmering gold lacquer to glue together fragments of plates and bowls that would otherwise be rendered useless. We sat at the feet of a Kintsugi master who’d spent decades perfecting his craft, and I felt like I was watching the books of Isaiah and Revelation come to life through clay and tender hands. 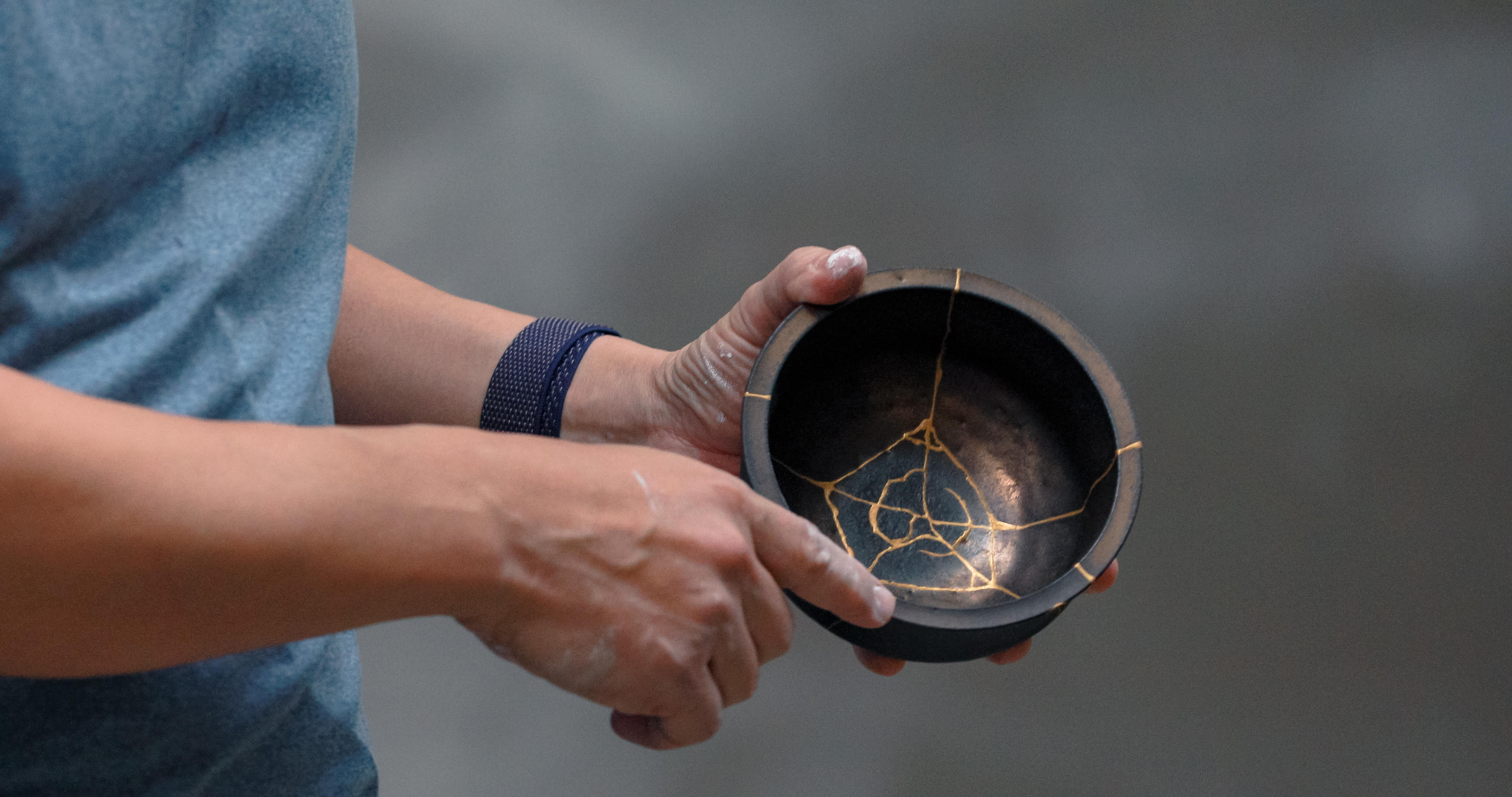 “You have to look at the fractures for a long time before you understand what’s going on,” this Kintsugi master advised us, “before any hope of healing can occur. Generations of tea master families have literally hung on to the fragments of the broken bowls, beheld these fragments, not despairing at their impossible future, but waiting in a patient, long-flickering hope. Not unlike fragile kinds of pottery, the traumas of a given land may be so deep you can’t fix them quickly. And indeed, Kintsugi is not just fixing something and reusing it. It’s a repair that creates something new—something unprecedented that is actually far more valuable than it was before. Kintsugi goes beyond restoration, to a new creation. It proves that something can be more beautifully broken and mended than it was before it even broke.”

This winter issue is taking a pause before the fragments, not answering all questions nor probing all divisions. We do believe that restoration is possible, even as we know a cracked life to be a more natural state than a whole one, and that whatever is restored will be both the same as and different from the original fallen state. But what does restoration require of each one of us today? If our very birthmarks carry renewed weight amid the factions, how might we as democratic citizens steward their particularities toward the common good, with all our birthmarks’ scars and sins?

There’s a beautiful line in Terrence Malick’s latest film, A Hidden Life, featuring the life and choices of an Austrian farmer who resisted joining Hitler’s army. Toward the end, he gazes up at the rays of sunlight streaming through the bars of his prison, and he writes to his wife these words: “When you’re no longer willing to survive at any price, a new light floods in.”

This may be the only wisdom to disarm the tribal temptations of our era. A letting go, a willful self-abnegation, a breaking up of self-preservation and a breaking open of self-surrender. These are foolish postures, foreign in the stronghold of today’s battle lines, but they are the only power for those who labour at the cracks of a riven landscape.